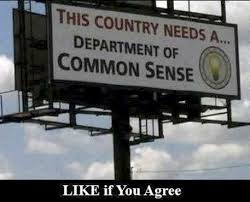 First, I join my colleagues in remembering Dr. Richard McCallister; he certainly showed us all how to live with, shall we say, certain unpleasant realities and truths.  R.I.P. Rick!

Second, I invite all of you to mourn with me the passing of a beloved old friend, Common Sense, who has been with us for many years. No one knows for sure how old she was, since her birth records were long ago lost in bureaucratic red tape.

She will be remembered as having cultivated such valuable lessons as:

– Knowing when to come in out of the rain;
– Why the early bird gets the worm;
– Life isn’t always fair;
– And maybe it was my fault.

Her health began to deteriorate rapidly when well-intentioned but overbearing regulations were set in place. Reports of a 6-year-old boy charged with sexual harassment for kissing a classmate; teens suspended from school for using mouthwash after lunch; and a teacher fired for reprimanding an unruly student.  Her conditioned worsened when two children were forced out of a suburban school in Philadelphia because they came from Rwanda which is 3000 miles from EBOLA-infected West Africa.

Common Sense was unhappy when supervisors undermined their co-workers and treated them with disrespect;

Common Sense lost ground when parents attacked teachers for doing the job that they themselves had failed to do in disciplining their unruly children.

Common Sense lost the will to live as churches became businesses;

Common Sense finally gave up the will to live when adults refused to be adults and children ended up in charge.

Common Sense was preceded in death:
-by her parents, Truth and Trust,
-by her partner, Discretion,
-by her daughter, Responsibility,
-and by her son, Reason.

-As long as I get mine and get paid;

Not many attended her funeral because so few realized she was gone.