The Browning Of America 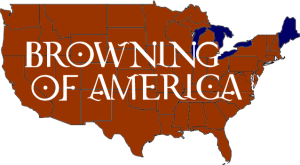 The Browning of America

‘America’ has always been multicultural. From the indigenous peoples, to the English, Africans, Chinese, and others, America’s colors have always given it hue much more ‘tan’ than ‘white’. However, over the centuries, the imposition of a hierarchy of the colors has privileged white over others. The effect has been that any color other than white has had a hard time breaking through. It is not the norm, it is an aberration.

All the while however, the other ‘colors’ kept adding to their numbers; in the last few years, it has been clear that while currently one in four trace their descendants to Europe, in a few short decades three in four Americans will trace their ancestry to Africa, Latin America and Asia. This was supposed to be the browning of America, but from the bottom up.

Obama has changed all that!! The browning of America is now very visibly from the top down! How will America react? We already know how the world feels about this: it has welcomed it. Why? Because it is the world! MJ and Lionel did not know it then, but they were quite prophetic!

America, welcome to the future! It has been here all the time, since our inception. We have chosen not to acknowledge it. How will we deal with it now?